On behalf of the Board of Directors of the Newton Villages Alliance, I’d like to invite interested Newton residents to attend the next event in the NVA’s Spring 2016 Speakers Series:

Preserving Local Control of Our Zoning and Land Use:                    A Cautionary Tale of HUD Intervention in Westchester

As you know, on May 12, 2015, Mayor Setti Warren and the City of Newton, as Respondents, entered into a voluntary, federal Department of Housing and Urban Development (HUD)  Conciliation Agreement with Complainants Engine 6, the Disability Law Center, Inc., and the Fair Housing Center of Greater Boston.  The Conciliation Agreement was a result of allegations, of violation by Mayor Warren and the City of the federal Fair Housing Act, brought to HUD by the Complainants.  These allegations were with respect to Mayor Warren’s decision to end discussions about, and not to fund, a proposed housing project for formerly homeless individuals at the former Engine 6 firehouse building.

The HUD Conciliation Agreement specifies that HUD will monitor Newton for five years to ensure compliance with the relief required by the Agreement.   One important deadline is approaching on May 12, 2016, by which time the City is required to  “identify at least five (5) sites which may be suitable for nine (9) to twelve (12) affordable housing units for chronically homeless persons with disabilities” and “inform HUD and the Complainants of the locations”.

However, communities that enter into such agreements with HUD sometimes find that once HUD bureaucrats are involved in their local land use, HUD will choose to stay involved, and extend the scope of federal bureaucratic intervention into the local land-use decision-making authority of democratically elected local leaders.  Westchester County is one such community, and Westchester’s elected leader, County Executive Robert P. Astorino is challenging what has been described as HUD “overreach” in his county.   Westchester’s story of HUD intervention is shocking, and offers a cautionary tale to local governments in places like Newton.  As Newton’s leaders prepare for Zoning Reform Phase 2, it is important for all to understand the potential for unintended consequences in the form of increased risk of allegations of violation of the Fair Housing Act.

County Executive Astorino is a compelling speaker and has agreed to take questions from the audience.  I am confident that you will find this presentation very interesting and well worth your time.  You can find more information about the NVA Speakers Series, including the video of our well-attended March 6 forum on Chapter 40B in Newton on the easy-to-navigate NVA website at: NewtonVillagesAlliance.org

I hope to see you on Sunday. Here’s the flyer: 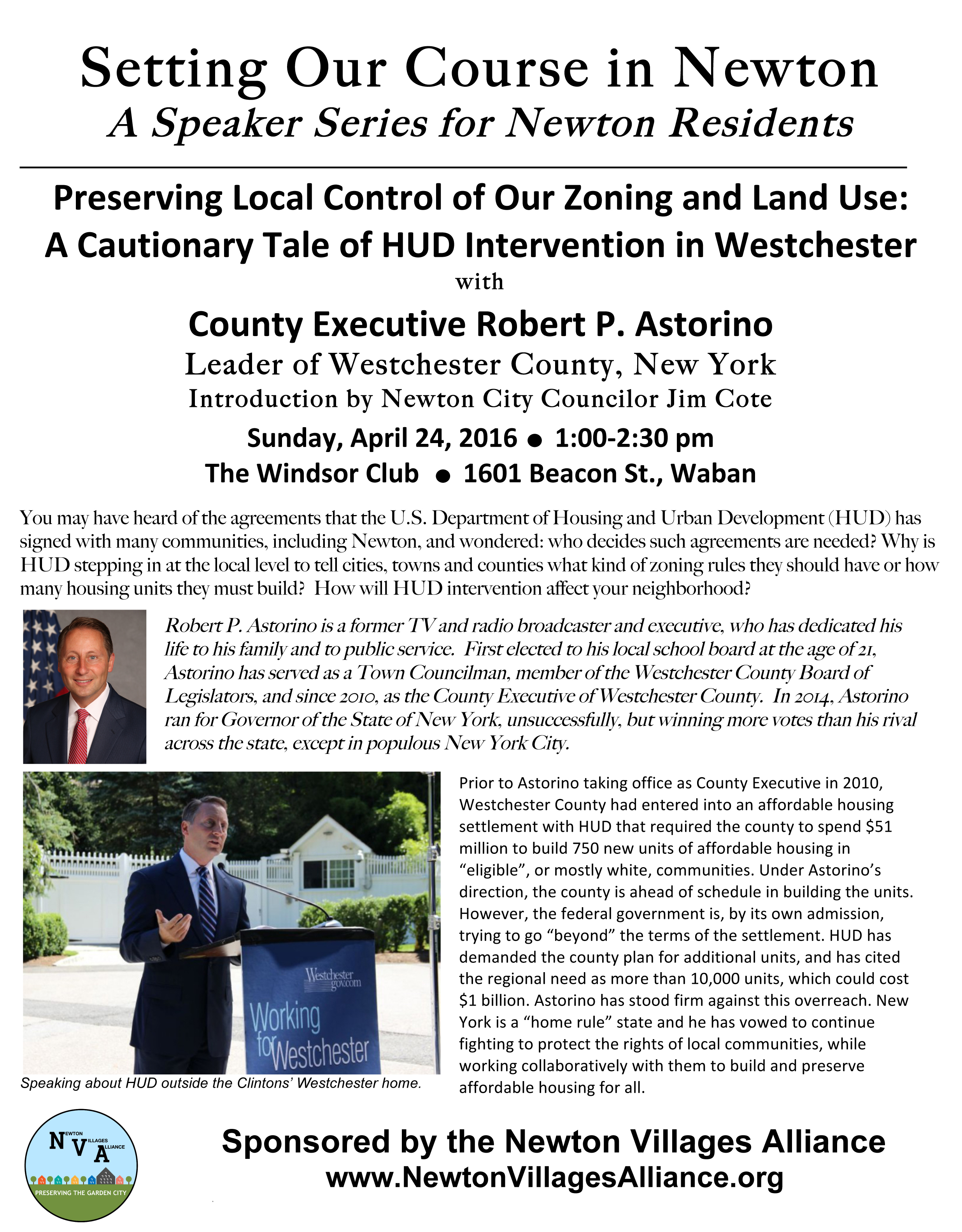 Sheila Mondshein, a fair housing lawyer, member of the Newton Human Rights Commission, and former Chair of the Newton Fair Housing Commission has been following the Westchester County case for many years. She has written a summary of the case, set forth below, which explains why HUD has withheld millions of dollars from Westchester County, because of its continuing failure to comply with fair housing laws. I encourage people to read it so they will understand the background of this important legal case and its impact on the enforcement of fair housing laws in Newton and across the country. LANDMARK COURT SETTLEMENT ON “AFFIRMATIVE DUTY” IN WESTCHESTER COUNTY, NEW YORK This landmark settlement between HUD and Westchester County in 2009 has had a significant impact on the way in which federal housing and community development funds are used throughout the United States, and it has led to increased scrutiny of local government housing policies. It also signaled a new commitment by HUD to assure that token efforts made by federal funding recipients to “affirmatively further fair housing” will not be acceptable. As a result, all local government units receiving federal funds are expected to actively further fair housing by creating more integrated housing opportunities for people whose housing needs are underprovided locally based on race, ethnicity, disability, familial status, or other protected grounds. The law suit was filed under the federal False Claims Act in 2006 by the Anti-Discrimination Center of Metro New York and the United States. It charged… Read more »

I had a chance to see HUD Secretary Julián Castro at the Kennedy library this week. People were very upset about HUD policies and actions having contrary impacts on communities than what’s touted. A pattern? Attorneys asking specifics got nothing of substance from the Secretary. He was more interested in demonstrating political ambitions and talking about his youth than answering serious questions. Perhaps Setti – US Conference of Mayors’ advisory board and Chairman of the Community Development and Housing Committee – can get his HUD job if Hillary picks Castro for a running mate. Oh wait a minute, maybe the Engine 6 HUD agreement with Newton doesn’t look good on the resume.