Kathleen Kouril-Grieser, irresistible force behind Newton Villages Alliance, and Kathleen Hobson, immovable object behind Livable Newton, have decided to settle their antipodal conceptual differences on density and development in Newton by agreeing to a duel with epees. They will meet in the tree-lined, solar carport-free parking lot of the Newton Public Library. The duel, arranged by a curious cooperation between both organizations, is to be underwritten by excess profit returned by 40B developers to the State. Cones of Joust-Ice will be served to the throngs expected to watch this remarkable Match of the 21st Wenchury.

Kouril-Grieser from Ward 2 has chosen Ward 8 City Councilor, Cheryl Lappin, as her second, while Ward 5 resident Hobson has chosen her own Ward 5 City Councilor, Deb Crossbowley, as hers. When asked by Tab Reporter, Jonathan Dame, why she had picked Lappin, a Councilor from a faraway Ward, as her second, Kouril-Grieser replied that she was absolutely certain that she would have no need for a second; however, on the off-chance that her second would be called upon to perform this honorable duty, Kouril-Grieser would rely on her belief that Lappin is mightier than the sword!

It had to happen! 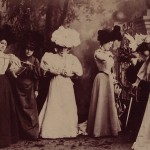 After a primary seasn filled mainly with verbal jousting, the prospect of this dedicated but divergent duo taking it outside to get their points across is indeed exciting! We can only wish that they had decided to hold their encounter last November on Election Day. Voter turnout would have set all-time records, I am sure.

Thanks, Sallee, for this very entertaining—and timely— April 1 post!

Kouril Greiser has just called me to ask if she should accept an offer from Setti Warren for her to bypass Cheryl Lappins offer to second her upcoming duel in favor of the mayor. Discussions are ongoing regarding the possibility of ms Greisers victory and her Including him in her administration in Washington. Stay tuned to see if Ms Hobson will show up. There looms the possibility of a conspiracy here.