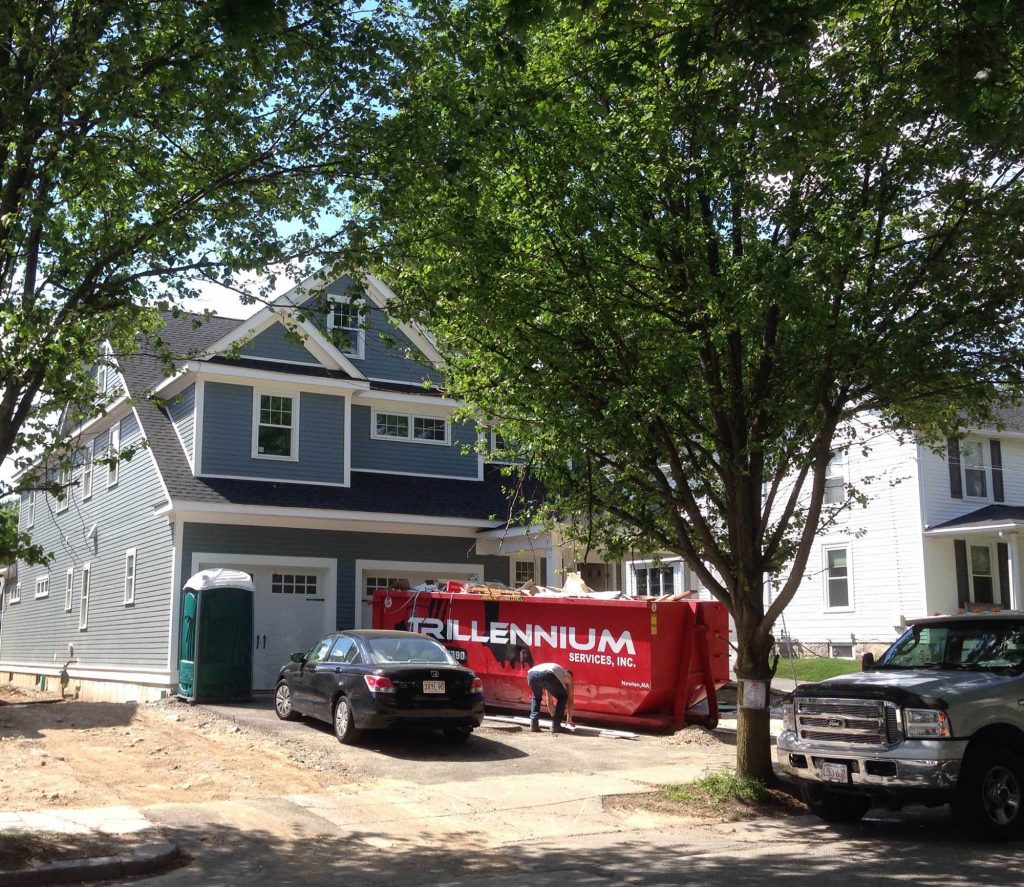 If you are in any doubt how much Newton mayor Setti Warren favors the interests of developers over residents and taxpayers, consider what has happened at 255 Cherry Street.

Massachusetts General Laws Chapter 87 protects public shade trees by requiring a hearing before any public shade tree (not deemed unhealthy or hazardous by the Tree Warden) can be removed. If any written objection is received at or before the hearing, the tree cannot be removed unless approved by the mayor (for cities) or selectmen (for towns).

On June 8, I wrote this objection to the removal of a healthy, attractive pear tree at 255 Cherry St. The request was, as I noted, an unfortunate return to a practice that used to be common some years ago, but which we hadn’t seen in a few years, of developers designing houses and building driveways and garages behind street trees as if they weren’t there, and then asking for permission to remove the tree. This is either extreme stupidity, or a cynical, intentional strategy to increase their chances of getting the tree removed by by building first and seeking forgiveness later. I’m going with cynical.

Clearly this developer knew the tree was there. His company, M-7 Realty LLC, acquired the property on December 5, 2015 for $625,000. A demolition permit on the existing house, which had been unanimously voted preferably preserved by the Historical Commission, was issued on January 22, 2016, on the very day the one-year demolition delay expired. The plans he 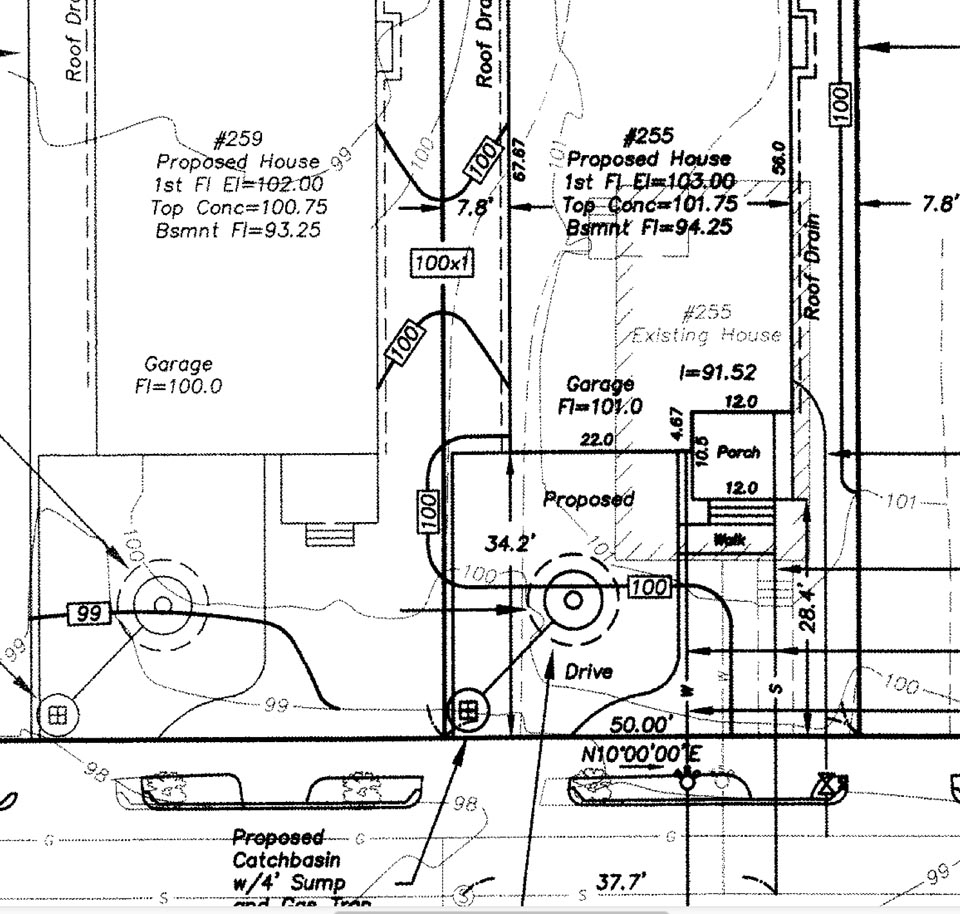 submitted, and which Inspectional Services approved, show a double wide driveway narrowing to the then-existing curb cut, preserving the tree. Nevertheless, with the new house built, he applied to have the tree removed, and the tree was posted for a June 10 hearing.

Mine was not the only objection; at the June Urban Tree Commission meeting we were told there were nine objections.

I felt strongly about preserving this tree, as it was healthy, with a full canopy (being on the side of the street without overhead wires, and therefore not butchered by utility pruning), a pear, not a Norway maple, therefore adding species diversity, and it was on a busy street so a lot of people got to see it. And Cherry Street has been losing many trees which have died from old age, storm or other damage, making it even more important to preserve the remaining healthy trees. (By contrast, I did not object to a similar removal request the same month on Palmer Road in Waban. It was a Norway maple, with diminished canopy due to utility pruning, and on an out-of-the-way cul-de-sac, and I thought in that case the city was better off taking the replacement trees which would be required.)

So I was shocked and disgusted on July 13 to see the tree gone, and to learn that the mayor had approved its removal on Friday, July 8. (The developer wasted no time in removing it!) 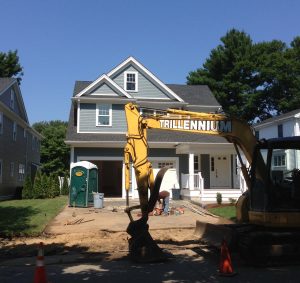 The mayor had to know there was at least one objection, otherwise he wouldn’t have been getting an appeal. Did he not bother to read the objections, or read them and ignore them? I don’t know. What argument did the developer make to persuade the mayor? (I’m trying to find out.) That his original layout would be inconvenient for the ultimate buyer? (So why’d he design it that way?) That it would somehow be unsafe? (Same question, and why did Inspectional Services issue a building permit?)

Now, instead of an attractive, healthy tree and all its benefits of pedestrian shade, storm water retention, heat island reduction, and bird habitat, we have an unobstructed view of an ugly double garage door and double wide driveway. And we have another signal to developers that they can get away with anything. Is it surprising that so many people think people at City Hall are getting paid off? 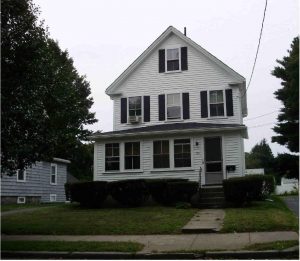 That’s on top of losing losing a circa 1900 house, which the Historical Commission thought worth preserving. That house was relatively affordable for Newton (the prior purchaser, SZ Realty Trust, paid $540,000 in January 2015 before flipping it to M-7 Realty 11 months later for $85,000 more). Living area (excluding garages) has more than doubled, from 1,598 sq.ft to 3,792 sq.ft., so expect a selling price well over $1 million.

I am happy that Ted Hess-Mahan is planning to docket an item to require notification of city councilors when a tree in their ward is the subject of a removal request, and that Alison Leary plans to co-sponsor it. However, I’m not sure the mayor will show any more regard for objections by councilors than to those of mere residents. A better check and balance would be to go a step beyond notification, and modify the city’s Public Tree Ordinance to require approval by both the city council and the mayor before an objections to a tree removal could be overridden.

Julia, first of all, thanks for your kind words and for your involvement in this issue. In addition to the notice required by Chapter 87, Newton’s tree ordinance also requires that notice of any appeal and the Mayor’s decision must be given to the Coty Council and/or the Ward Councilor. No public tree may be removed until appeals from the Mayor’s decision are resolved. For whatever reason, that failed to occur, which is why I asked to amend the ordinance to also require notice when an application has been filed, so that the councilors from the ward can follow up. Regrettably, I did not learn about any of this until after the tree was removed, in part because I never saw the notice posted on the tree itself, due to the fact that construction vehicles and large trucks were parked in front of it blocking the view every time I passed by. I am grateful that you and at least 8 of your neighbors took the time to weigh in. I hadn’t considered requiring City Council approval, but it is probably worth looking into. Chapter 87 says only that where there is an objection, the Mayor can approve removal of a public tree. So I would have to do some legal research to determine whether the state law preempts a local ordinance that would also require approval from the City Council. This house, and the one next to it built by the same company, also helped spur the City Council… Read more »

Thank you, Ted. I’m not aware of anything in MGL Chapter 87 that precludes giving public shade trees more protection than state law does, so I hope that will be possible.

BTW, I forgot to mention that the number of co-docketers is now up to 12.

Julia, Please consider the flip side of this. I have walked up and down that street with my Granddaughter in her stroller many times. The trees such as that one have provided shade as we walked along and the feeling of neighborhood, a sense that we are truly the Garden City and that our tax dollars may actually, once in awhile, go to something life-enhancing such as the upkeep of this tree.
Now please consider this though: It was in my way sometimes, blocking the view of the lovely street marked like severe acne with potholes, cracks and drizzled tar. When pushing the stroller, there were times I would sometimes have to actually GO AROUND trees. And they were IN MY WAY if I wanted to cross the street. Additionally and not incidentally, they provided homes for singing birds. Do you have any idea how noisy those things are?
And, really in the end, what is more important: The quality of life around us as we’re out walking and enjoying a view, paid for by all of our taxes, or the convenience and profits of a developer?

Ah, Mark, you may be being facetious, but I recall a removal request years ago where one of the complaints was that the tree attracted noisy birds!

An update. Here is the request to the mayor, and the response, which I find even more depressing. http://newtonforum.org/wp-content/uploads/2016/07/McAuliffe-documents-7-22-16.pdf No justification for removal at all, just the rather tautological explanation that putting in the new curb cut and driveway would kill the tree, so let’s cut the tree. No acknowledgement that where they wanted to put the curb cut is not where they said they would put it when they submitted plans. Nor that the other option was sticking with the prior curb cut, with which the tree has coexisted for years. And does he want points for supposedly considering moving the tree “further up the sidewalk”? You don’t need to consult an arborist to know that you can’t dig a tree this size out of a 30″ or so berm and have it survive, even if there was a place to put it, and if you tried it would be prohibitively expensive.

.As for the mayor’s response, I’m not sure what “we’ve examined this case thoroughly” means, but it doesn’t appear to have involved any contact with the people who objected, or any awareness that the proposed curb cut was different than in the approved plan.

What a waste of a good tree.

This really pisses me off. Not only do we lose a tree (I’m sure the Mayor will argue how he is such a steward of the environment), but it shows how there are 2 sets of rules….one for developers and one for the rest of us. Great to be a Newtonian these days.

Thanks Julia for being involved with this. Also, thanks to Ted in-advance for seeking to require more notice.

A real estate broker told me that the number one attribute that make a neighborhood and city attractive is the density of mature trees. Let’s not forget this.

Yet some real estate agents seem to be facilitating teardowns, which lead to so much canopy loss on the properties themselves, and damage to public trees from construction vehicles, from branches being hit or intentionally cut, to vehicles parking on berms in the root zone, to roots being damaged when new sidewalks and curb cuts are put in. I saw all those happen across the street from me, and that wasn’t even a developer who’d be flipping the property. It was homeowners doubling the size of the house and planning to say, but still, the contractors did not take any care to protect the trees from damage.

This incident makes me FURIOUS! Developers too often disregard the tree ordinance and simply pay the fines (or in this case get a favor from the mayor). The fines need to be punitive so that they wouldn’t even consider pulling these stunts. I have had developers 3 houses to the north and 3 houses to the east of me both remove huge, old, beautiful, healthy trees that were not permitted. The sound of the birds who lost their homes on those days was heartbreaking! The minimal fines the developers had to pay was a pittance compared to the profits they were making on the houses. Maybe tree fines should be a percentage of the value of the homes they are building.
The fact that the mayor single-handedly allowed the removal of a tree owned by the taxpayers really irks me. And while I’m on this rant, it also infuriates me that developers can pay into a fund that does not necessarily replace the trees in the same neighborhoods where the trees are lost (such as mine where more than 100 trees have been lost due to development and numerous ones due to gas leaks). This is wrong! What can be done to change these policies??