When the Massachusetts Turnpike Authority bulldozed through Newton in 1962-63 to construct the Turnpike extension, it took hundreds of homes and business properties by eminent domain, provoking bitterness that lasts to this day. Just as devastating was the impact on the village centers of Newtonville and Newton Corner.

Newton Corner’s bustling village center was almost obliterated by the Turnpike, and the job finished in 1980 with the arson and demolition of the five historic buildings collectively known as the “Nonantum Block”. A developer had proposed a massive mixed-used structure to replace the Nonantum Block, but when the Board of Aldermen denied a permit, he built a banal retail and office complex, by right, instead. Together with the loss of the village railroad station, replaced by a towering air rights hotel and the Exit 17 access ramps, “revitalization” annihilated the village of Newton Corner, and produced what Newton residents sardonically call “the Circle of Death”.

The railroad had long bisected Newtonville, but the Turnpike split it further apart, like an open wound. Still, Newtonville was luckier than Newton Corner. It did not see its railroad stop replaced by a highway exit (the handsome station house was already lost). The Turnpike Authority’s air rights deal in Newtonville, while it did result in the Brutalist architecture of the Star Market, did not produce another misbegotten concrete tower.

“Those who fail to learn from history are doomed to repeat it,” George Santayana famously wrote. Now, Newton is at risk of repeating the devastating mistake inflicted on Newton Corner, this time in Newtonville. Once again a developer is seeking a special permit from the Board of Aldermen (now City Council), proposing to build a massive mixed-used structure that would involve the demolition of the historic buildings collectively known as the “Orr Block”, and, he has suggested, all the buildings on the north side of Washington Street from Walnut Street to Lowell Avenue. Julia Malakie has written in detail about the proposal here and here. The implied threat is that if a Special Permit is denied, the developer will demolish the buildings anyway and build whatever is allowed by right under the zoning ordinance (2-3 story office buildings). In this case, the residential and commercial tenants have already been told they will have to leave.

Here’s an idea: what if instead of repeating the mistakes of the past, we as a community demanded that our leaders work for us in forging a way forward that reunites the severed village center of Newtonville? that restores the long lost village green? that rebuilds an accessible railroad station? that provides new “land” for high-skills employers, complementary retail, senior/affordable housing, and parking to support commuters, shoppers and residents?

Let’s build a deck over the Turnpike and the commuter rail tracks from just east of Walnut Street to Lowell Avenue and create a “Ted Kennedy Greenway” in honor of the distinguished late U.S. senator.  The final plan for what the Ted Kennedy Greenway would look like must be negotiated between the public and private participants, and the people of Newtonville the City Council and the Newtonville Area Council. Post Austin Street, no one should imagine the people of Newtonville would tolerate being left out of the decision-making process ever again. The Greenway proposal and sketch are just a draft plan, not a final plan, and can be seen here.

The good news is that the technology for air rights projects has advanced and the cost is directly related to the weight of what goes on the deck. So if what’s on the deck is a village green, some buildings of two or three stories, and re-positioned, tree-lined parking lots for the village and for a refreshed Star Market, the cost would be low enough to be manageable in a public-private partnership. No looming concrete tower is required to make this work financially. Now elected officials and the private sector are discussing this idea, and support is growing. It could be a win-win for residents, City Hall, and the public and private participants.

The best development at the corner of Washington and Walnut would be one that restores the historic buildings and houses threatened by developer Robert Korff’s current proposal. Sadly, he has thus far rejected the idea of preservation. He should be encouraged to produce a design that more faithfully reflects Newtonville’s Victorian architectural heritage. Of course, the five stories he has demanded is a negotiating tactic. All developers make outrageous demands, knowing they will be knocked down in height and mass by City Councilors looking out for the best interests of their constituents and the city’s fiscal health.

But when presented with a developer’s “big ask”, rather than negotiating from the status quo and inevitably accepting more development than voters want, we should counter with our own big ask. In this case, the counter is: work with us to make the Ted Kennedy Greenway a reality, and protect existing commercial and residential tenants by offering them compensation for their losses sufficient to allow them to rebuild their lives or businesses, preferably in Newtonville. Here’s a question:

What is your vision for the re-unification of Newtonville?

This greenway design is a terrific idea. Many city councilors support it. Now we must find a way to fund it and plan the design and implementation.

If it can happen in the Back Bay and at the Sheraton in Newton, why not in Newtonville? A village green would be balm for this area so densely packed. This is an idea whose time has come and deserves further consideration. Perhaps all those special permits being doled out could come with a proviso to fund the project?

This is such a great example of forward-thinking, big-picture planning. Instead of developments popping up one at a time, with no long-term planning, this is the way the Villages should be envisioned. If/when this plan comes to fruition, Newtonville will be the shining gem of Newton and a planning model for other cities/towns/villages. Kudos!

This would be wonderful for Newtonville and anyone who goes there, and likely attract many more people to Newtonville businesses than building multistory apartment buildings. Consider what an asset the park on the Newton Centre Triangle is for that village, with summer concerts and events like Harvest Fair, and for just hanging out by the garden. Same with the Hyde Playground and their events in Newton Highlands. Newton Corner has Farlow Park, which I love, but for people in Newton Corner north of the Pike, it’s not very easy to get to. Can’t see letting your kids bicycle across the Circle of Death. Newtonville has no central public green space aside from the small plaza at the Senior Center. A village green would be a great addition. I am some combination of discouraged and appalled by so many aspects of the Mark Investment plan — the lack of concern about displacing the businesses and the ballet school and the current residents and perhaps even the Post Office, the massive scale, the lack of interest in preserving even the facade of the Orr Building,as was done with Grover Cronin in Waltham, and the rather paternalistic attitude that this development would be doing Newton a favor by replacing ‘tired’ buildings. I would like to think our City Council would demand something better, and not allow Washington Street to become another Pleasant Street in Watertown, lined with bland apartment buildings. But the lack of action to stem the loss of our architectural character… Read more »

While noting that those who fail to learn from history are doomed to repeat it, the lesson of Newton Corner appears to be totally lost on the author. When the Board of Aldermen turned down a special permit for a mixed use development in Newton Corner, the developer built a “banal retail and office complex.” That could well be the future of Newtonville north of the Pike. What could a developer build by right? Let’s do the math: All of the parcels on Washington Street in Newtonville between Washington Terrace and Walnut Street are zoned either BU1 or BU2. The BU1 parcels that front on Washington and Walnut Streets total a little under 38,000 square feet while the BU2 parcels abutting the residential neighborhood behind are a little over 77,000 square feet. The maximum height is two stories and 24 feet, and the rear setback to the residential neighborhood is just 15 feet from the property line (the rear setback abutting nonresidential districts is 0 feet). The minimum lot area per dwelling unit is 1200 square feet. Doing the math, there is a potential for up to 95 units of housing–none of which would have to be affordable. Or it could be a mix of retail, office and/or residential, all of it two stories, none of the units affordable, and no mitigation for the neighborhood in terms of open space, infrastructure, accessibility, walkability, etc. As for the idea of a village green over the Pike, it is a pipe dream,… Read more »

My “Vision “for the reunification of Newtonville, has some differences from the scheme advanced here. My original proposal recognized the limitations placed on the decking of the two communities ( North and South Newtonville ), by the existence of the Star Market facility and its functional reality. This building has its escaltored entry, service to customers cars under, and serve truck dock at it’s western end that cannot realistically be radically altered. To do so would take at least a couple of years, and during that period this market would be shut down. Further the costs of extending the deck all the way to Lowell Ave would, while costing radically more, would not really contribute much to the reunification effort. The focus of the effort is really the knitting of the Walnut Street – Washington Street / Austin Street area. In addition the focus should recognize the importance of the depression of the existing rail bed, and if necessary the turnpike surface, such that Walnut street and the attendant decking and village scale construction are at close to the same natural level that was there a century or more ago. Arguments have been forwarded against the depression of the rail bed as being too difficult, to which I would counter with the reminder that this has been a relatively easy effort on the part of rail roads historically, when thousands of miles of railroads were built across our country, through mountains,across rivers, up and down hills, with what must have… Read more »

All of the buildings in this photograph of the Newton Corner train station are gone today. What a difference 60 yrs makes. 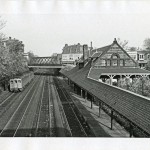