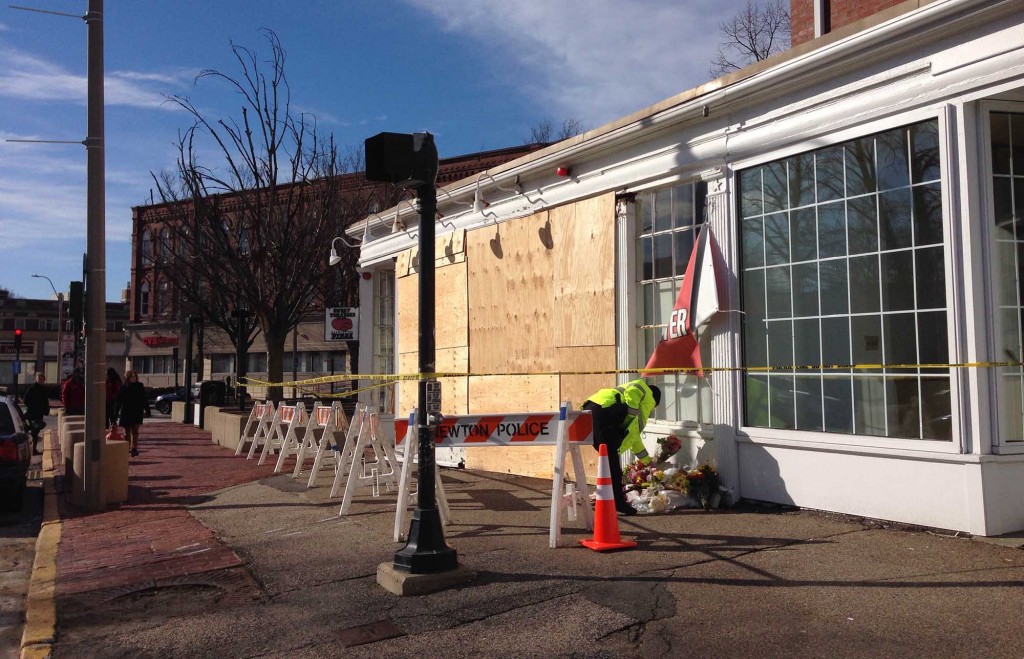 Thank you to Chris Pitts for the invitation to write here.
My first post was going to be a mostly happy one about progress on trees, and I will still write that post, but as an almost lifelong resident of West Newton, I can’t ignore the tragedy that happened Tuesday night in West Newton Square, where two customers in Sweet Tomatoes were killed, and several more people injured, when an SUV coming down Chestnut Street drove through the wall and window.
I’m so very sorry for the families and friends of Eleanor Miele and Gregory Morin. I didn’t know either of them, but when this happens so close to home, it could have been any of us who lost a friend or family member. And I’m pretty sure Gregory is someone I was going to meet planting trees in April, which makes me even more sad.
Like many of you, probably, I’ve stood at the counter of Sweet Tomatoes waiting for their very good pizza. It’s been my go-to place for takeout for annual post-Thanksgiving dinners with high school friends. And even more often, I walk that bit of sidewalk on the way to Shing Yee. It’s frightening to think how much worse this crash could have been, had there been pedestrians passing by.
We think of Newton as a safe city, and it mostly is. I never imagined something like this could happen in my own village’s square, but it’s really not so unimaginable. We’ve read about tragedies involving runaway vehicles happening in other states and other cities; there’s no reason to think we’re immune. And only a year ago (February 2015), but it seems longer, I came upon this scene of a car that had almost run into the former Keltic Krust, then under renovation to be Judith’s Kitchen. I recall there were injuries, but no fatality. 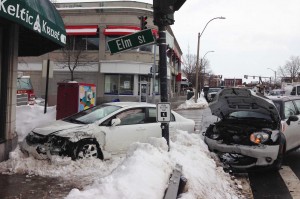 Maybe there will ways to make us safer, but we’ll never be perfectly safe from being in the wrong place at the wrong time. There are too many examples of that. I don’t have any answers, except to appreciate every day, and try to be nicer to people while we can.

Thank you for your moving post about this tragedy, Julia.

In thinking about what steps might be taken to prevent a similar accident in the future at this (and other T-shaped intersections), I wonder if several bollards erected along the sidewalk facing Chestnut Street might stop or at least slow an oncoming car enough to prevent its entering the building at speed. There are similar intersections in Newtonville where Austin St, Madison Ave, and Highland Ave end at Walnut St and only a sidewalk stands between oncoming cars and a restaurant or store. I hope this accident will move the city’s traffic engineer to identify all such intersections and investigate whether such a measure would indeed improve safety.

That does seem like something to consider at major T intersections, and especially considering that there actually are some bollards here at Washington & Watertown in front of the green island– you can see them at the left in the picture. Fortunately, West Newton Square is due for a redesign/makeover, very soon I believe. Whatever else is done with regard to traffic pattern, it would seem possible to extend the row of bollards. Or improve them — as long as they’re structurally secure enough to protect pedestrians, they don’t have to be ugly, they could incorporate planters and serve a dual purpose.

A sad event. Will we get information about how this happened? It seems worthwhile to know this before decisions are made about how to prevent such an accident in the future.

In case you haven’t seen this announcement on the City’s website:
“On Thursday evening Mayor Warren will be joined by first responders, clergy and community members for a vigil to honor the victims of yesterday’s (sic) tragic event at Sweet Tomatoes restaurant. This tragedy has touched us all, and we are offering this event as an opportunity for our community to stand together in remembrance of the victims.

Please join us to show your support for the victims and their loved ones.

The vigil will be held in the park adjacent to the Newton Police Headquarters, located at 1321 Washington Street in West Newton on Thursday, March 3rd at 6:30pm.

We encourage everyone to come together to reinforce our commitment to each other and to our city.”

I attended the vigil on Thursday night and feel the need to comment on it. In my opinion, the mayor used his exposure in front of the TV cameras to tout Newton’s safety record and rave about the police and fire departments’ performance during the tragedy. I expected the vigil to be more about remembering and honoring the victims. While I have the utmost respect and gratitude for the first responders, I felt this was more of a political event than a vigil for two people who lost their lives and many who were injured. Did any other readers attend? What were your impressions?

I was not able to go to the vigil because of working, so I can’t speak to this vigil. Who else spoke? Was it just elected officials, or others, like the police and chiefs? I think it’s hard for anyone to know what to say after horrible events like this, and you can say something with the best intentions, but it may come across differently to someone who was affected.

My 20-something niece has lost more friends to untimely deaths, both medical and accidental, than I have at 61. My experience of people dying has pretty much been relatives or coworkers or neighbors dying of age-related illnesses, though some of cancer in their 50s. But what I’ve found most comforting is hearing and telling stories about the people when they were alive. I still remember hearing about how a high school friend’s father used to quiz the kids on state capitals while he was shaving in the morning. But these deaths were so shocking and recent, it’s understandable if no one close to the victims felt up to talking or even attending. And the first responders deserve recognition. They must have been very affected.

Does anyone know how many accidents have occurred in West Newton square over the past 24 months? I keep hearing of more as the days go by. Is it the worst intersection in Newton?

In case readers want to contribute to funds to support the victims and the families affected by this terrible tragedy, I’ve read about these two ways to do so: