A lot’s been happening, including blizzards of emails, since I wrote about this issue back on March 15. It turns out it’s very hard to save trees from well-meaning solar advocates. To recap, in I hope chronological order:

— I did my own inventory of the trees that appeared would be impacted in both the Newton South and Library parking lots, and sent it to the City Council. Even being conservative in assessing condition, I found most trees in fair to good condition, not ‘mostly dying’ as has been alleged. Emails I received in response revealed changes from the plans that were in the March 14 Finance Committee agenda. Much better news for trees at South, but worse  at the Library. 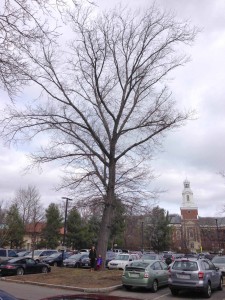 Carports at NSHS had been rearranged to impact “only” two 4+” diameter sugar maples, and two empty spots. A row of thriving red oaks was no longer threatened. But at the Library, in addition to removing all the trees on the north and central islands, Ameresco and the city now wanted to remove the largest tree on the lot, the healthy 30” diameter white oak on the south island, because an updated shadow study showed it would cast a shadow on the middle island solar panels.
— At their March 21 meeting, after extensive and sometimes passionate debate on both locations, the City Council approved the NSHS solar plan, 23-1, Schwartz opposed. (I don’t know if the two sugar maples can be moved, or whether the cost will be prohibitive.) The vote on the Library looked to be closely divided, and Councilor Cote chartered the item to give the public a chance to become informed and weigh in, and to hear from the Urban Tree Commission.
— Urban Tree Commission chair Barbara Smiley dug up some fascinating history on a past battle over trees at the Library parking lot, during construction in 1989, which she called “World War Tree,” when Aldermen including Brian Yates, George Mansfield, Polly Bryson and Dick McGrath, fought to save mature trees. And Mayor Mann’s building commissioner was almost censured for unauthorized tree-cutting.
— The city and Ameresco changed their minds again about the 30” oak (which we’ve estimated at 80 years old), and said they didn’t have to cut it down after all, as it would only reduce solar output by 2.7%, and they could live with that. We were asked if that changed our opinion of the project. Um, no. I was appalled that they would have removed this tree for such a minimal dollar impact. (2.7% of projected Library carport savings of $16,600 is about $450/year.) Or that they hadn’t bothered to figure out the impact. Others feared that down the road, they’d decide the oak would have to go after all. Plus, we’re not looking at live tree, dead tree, big tree, small tree. Dead trees can be replaced, and all our big trees started out small.
As we said in our letter of March 28, “The important issue is not the preservation [by transplanting] of the individual small trees that are there now, but the lost opportunity for mature trees in this environment in the future.” We urged the City Council to find other locations for solar that did not impact our public trees. 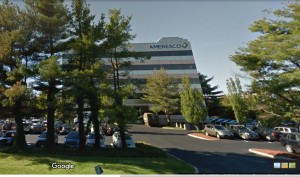 — And my fellow Tree Conservancy director Barbara Darnell visited REI in Framingham, whose solar carports are pictured in the city’s Solar Program Phase 2 presentation, and got a first-hand look. They leak in the rain. She 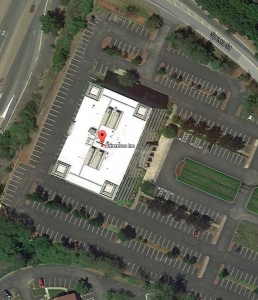 also checked out Ameresco Solar’s headquarters nearby. Their parking lot has…trees! And unless they’ve added something since Google Earth’s last flyover, their roof appears to be missing something, too.
The City Council will vote tomorrow night.
What would you most like to look at for at least the next 20 years in the parking lots you visit? – trees or carports?

Nice column! Now what tack do you suggest we all take? As I look at the library, those rooftops could support many, many solar panels. Level 2 charging stations need not be waterproof, nor do they take up much space. Thus, those pavilions are unnecessary. What else does the city want to do? Maybe I don’t grasp just what the plan is.

If the City of Newton were really serious about the harvesting of solar energy, and not just small time piecemeal attempts at political correctness, it should take up solar farming at a meaningful scale.
To plant a few ugly panels in a library parking lot where people live, or the roof of a fire station is a rediculous idea.
Consider the possibility of developing a four mile long bank of solar panels on the south facing north side of the Massachusetts Turnpike throughout its length through Newton.
When the Turnpike was built through the city, hundreds if not thousands of acres of our city was taken from us by the state. It’s time the state ( or Turnpike Authority ?) should be called upon to allow Newton to recover property, or at least the right to use this land to develope a serious energy source. A huge linear farm alongside the commuter rail line would have little negative aesthetic cost as there is nothing pretty in that view and it would be a truly meaningful attempt at solar energy recovery.