There is a concerted effort to undermine Newton residents.

John Koot wrote just yesterday of the attempts to rezone Newton as a gift to the high-stakes land speculators, who require special permits and rezoning to bring their big gambles to fruition. Our city administration should not shortchange residents’ interests to accommodate outsiders’ bets. “Newton is not a high rise city” Mr. Koot notes, fearing the push to new high-density zoning via profligate special permits leads exactly there. I agree.

Witness the Planning Department’s cheerily vague language that Newton needs “a master plan” to promote “village vitality”, housing, and “business development”.  What does this mean? It is very difficult to know.  When asked at a recent Land Use meeting what the boundaries of village centers are and how far beyond the village centers dense urbanization should go, Newton’s Chief Planner Alexandra Ananth shrugged her shoulders and said she “couldn’t say.”

If the Planning Department doesn’t know, who does? Who determines those limits? What do residents who live next to potential high-density zones think of rezoning? The Planning Department and the Zoning Redesign Committee say resident-input will be essential. But this is not enough. We need a referendum that will allow residents to vote on specific changes proposed.

Why not just go with “resident-input”? There are plenty of reasons to question whose voices will be heard. Residents who raise concerns about recent and drastic proposed changes have been derided as racist, ageist, and/or class-ist.

Residents are made to sit through 2 or more hours of a committee meeting to earn an eventual 3-minutes’ chance to speak. Those who exceed this pittance of allotted time are cut off.  Many other frustrated and tired people leave without having had a chance to speak, learning only how difficult City Hall can be.

This contrasts sharply to developers’ accommodations. They have the ears and eyes of the Committee or Board at the start of every meeting and the luxury of professional presentations enhanced by their own sources. They have the benefit of fanciful illustrations and images — assuring us that they are using “data-driven” information yet their resources are in-house and biased; their data of course omits information that runs counter to their cause; their presentations are provided by deft and expensive lawyers, designers, and public relations people. 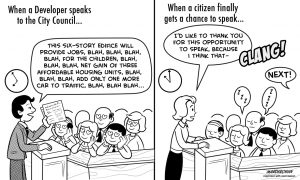 This contrast in access to government is patently unfair. I decry the premise of expecting residents’ vigilance to be the only barricade to an unrepresentative, external “grand design”. Necessitating constant citizen-presence for the preservation of Newton’s covenant with them is a distortion and possible abuse of democratic principles.

In a similar vein, Ian Lamont recently laid bare what is apparent to many who follow development in Newton: the Mayor is frustrated at his limited influence with development policy in our Garden City. His solution is to take special permits out of the hands of elected Councilors. This way, Lamont notes, the approval of special permits “would be up to city staff as well as unelected appointees who represent the interests of commercial developers, not citizens.” This will guarantee even less transparency and accountability.

The question of transparency and accountability has even greater importance when considering the measures recommended by the Charter Commission: do away with Ward Councilors and, now, Area Councils as well. Ward Councilors must live in the Ward they represent and are thus the most responsive and direct link constituents have to their government. Likewise, the importance of Area Councils is being downplayed by the Charter Commission.  Area Councils provide valuable resident input to the Board and Mayor about specific Ward and village concerns. Councils should be viewed as helpful resident links to our elected officials, not, as the Charter Commission seems to think, burdensome pariahs. The logic of eradicating the most responsive and accountable aspects of our city governance makes no sense –unless the “grand design” is to have Newton be run by insiders’ fiat or sold to the highest external bidder.

The enormous changes taking place in Newton are unsettling. But the anxiety about these changes is heightened because of the inability to have honest discussions that accommodate the breadth of concerns. LEGO strategies (the infamous planning charade) are not the stuff real neighborhoods are made of, stifled civic discourse does not lead to real solutions, and amputating our most democratic institutions does nothing to engender trust – not by a long shot.